This Gaura has been as delightful a plant as any I’ve ever grown. Catching a glimpse out the window this morning I marveled at it again, dancing in the breeze in early September sun. I planted this a couple of times in the ground, but it wouldn’t overwinter, so I tried again this summer in a big clay pot. The combination of pink, white and red flowers has been spectacular.

It draws hummingbirds as well as bees, even though the hummingbird feeder is just five feet away. Nothing is better food for these tiny dynamos than actual flower nectar.

I’ve mentioned some tips about feeding hummingbirds in previous posts, but I’m motivated today to just tell all. A friend asked me the other day, When should I take down my feeders? She asks me this every year. Every year, I tell her, About ten days after you’ve last seen a hummingbird.

Really? I thought you were supposed to take them down so they don’t miss their migration. Somehow this Myth resurfaces every fall instead of the answer I’ve given everyone who asks me for years. The birds won’t stick around late just because you have your feeders up: in fact, even after your summer population leaves, migrants passing through will benefit from your feeders staying up and clean.*

It’s not just the feeding schedule that matters when you commit to sustaining a hummingbird feeder through the season. Every summer, I inevitably encounter ill-kept feeders at the homes of people who should know better. Some of you have learned to keep your feeders clean, and some of you haven’t. Next time I have to say something, I’m naming names! And yes, I am scolding. I can’t help it, it’s in my nature. I’ve been subtle about this issue long enough.

Everybody means well when they put out feeders. Despite our best intentions, as frail and fallible humans, we don’t always follow through. Feeding hummingbirds isn’t something you do at your convenience, because it’s nice to have the pretty birds around. It’s a commitment: You commit to serving the welfare of the birds daily, because otherwise you contribute to their demise. There are so many ways to do it wrong, and the consequences are dire.

Blue and red salvias planted in pots around the patio, when fed and deadheaded regularly, provide bountiful food for young hummingbirds migrating later than their parents, and learning to trust my garden as a reliable resource. I’ve learned it’s worth it to buy these tender perennials annually and tend them well, for the bountiful beauty they provide with both their blooms and their pollinators. 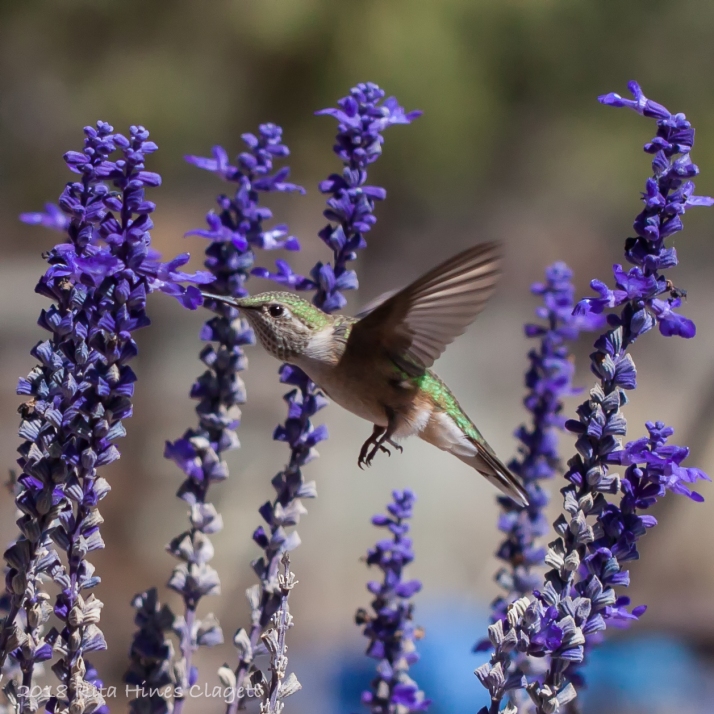 Caveat: exactly when to take down feeders is an art as well as a science; some people in the far north take them down at the first hard frost, or even earlier. This may be where the Myth originates. Places with year round hummingbirds obviously don’t need to stop feeding at all. I could send you straight to Audubon for all you need to know about feeding hummingbirds, but that would leave me nothing to say.

Here in the central latitudes of the continent, experience tells me to leave my feeder up for at least ten days after I’ve seen the last hummingbird, cleaning and refilling it as needed.* There is always a last hummingbird, sometimes after I’ve taken down the feeder, so I keep a jar of nectar in the fridge for a few weeks even when I think I’ve seen the last one, just in case of an exhausted straggler. I’ll make one cup, and if I don’t use it in a week I may make another cup. A small waste of sugar is worth a hummingbird’s life.

This time of year, I see mostly summer’s youngsters in my garden. They’re learning what’s good food and what’s not. They check out all the flowers, and don’t use the feeder nearly as much as their parents did earlier in summer. Many adults, especially males, are already moving south. These juveniles are exploring, gaining insight and wisdom, as they check out red honeysuckle berries and rose hips as well as salvia and snapdragons. 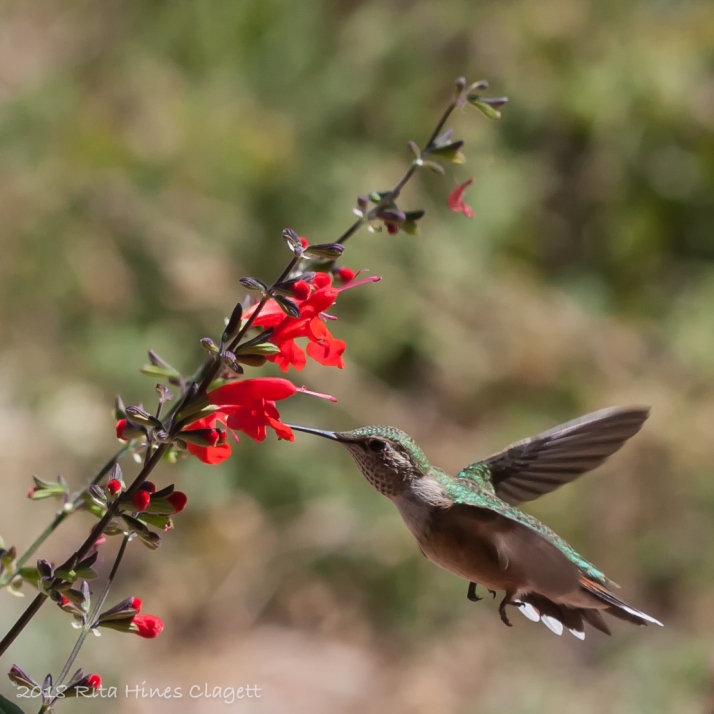 Tending hummingbirds demands dedication. When you put out a feeder you initiate a real relationship with a particular population of little beings, the closest thing to fairies in our remaining wild world. Connie and John used to feed hundreds of hummingbirds of four species just a few miles south and a thousand feet higher than I live here. They were committed. They brewed gallons of fresh nectar a day, and their feeders never had a chance to get cloudy or moldy. The sound was amazing! They moved to Wisconsin.

That shit shouldn’t even be legal to sell. Would you add an absolutely unnecessary red chemical to your every meal? No, you wouldn’t. Red food for hummingbird feeders is a sales scam, and hard on their tiny kidneys. Yes, they’re attracted to red, and that’s why feeders are usually red, but the food in them should be clear.

Once and for all, the best and cheapest nectar takes just a few minutes of your time. One (1) part refined white sugar to four (4) parts water. One to four, sugar/water, nothing else. You can put them both in the pan together, bring to boiling, and boil for a minute or two (no more!), or you can boil water in your kettle, pour it into the jar with the sugar, and shake the bejesus out of it until it settles clear, and you can’t see any sugar residue. The reason you heat the water is to increase its absorption of the sugar granules. There’s no need to cook it, as long as you make sure the sugar is thoroughly dissolved. Then let it cool to room temperature before pouring into clean* feeders.

I hear that hummingbirds don’t like to drink cold nectar, so maybe when you have refrigerated nectar you want to change your feeders at night. When they come to feed in the morning, the nectar is ambient temperature. On super hot days, nectar can spoil quickly, so change it every day or two even if they haven’t finished it. In early spring or fall, if it’s going to freeze at night, bring feeders in for the night and put them back out early in the morning so the food is there, not frozen, when they wake up.

You don’t have to scrub them every time you fill them, but you do have to rinse thoroughly in hot water, and swish away any sticky residue with a bottle brush or your fingertips, depending on the design of the feeder. Audubon recommends no soap, as the residue can harm them. Clean your nectar storage jars the same way you clean the feeders, every time you empty them.

You do need to rinse and refill more often during hot weather than in cool weather. And if there’s any sign at all of cloudiness in the nectar, or debris, or black or grey on the feeder, you DO need to scrub with hot water or a light hot water-vinegar solution, and rinse really really well. By the time you see that black stuff on the feeder, you’re already killing birds. It’s that simple.

An adult hummingbird who acquires fungus from your feeder carries it home to her tiny babies in their nest. She could die from it and leave them to starve, or she could transmit it to them. Or both. So keep your feeders clean. Invest in a bottlebrush or two, and get a pack of these perfect little brushes for the ports. It doesn’t take long for nectar to spoil in hot weather, and it doesn’t take you long to keep the feeders clean if you have the right tools for the job. I use really hot water if I’m cleaning a glass feeder, and less hot if I’m cleaning a plastic vessel.

I got rid of the feeders I kept for seed-eaters the summer before I started letting my two new kittens outside. It isn’t fair to bait the birds in when I’ve got cats that can’t help trying to catch them. I compromised on hummingbird feeders, cutting my three down to one, and kept that one mainly to supplement the flowers, which don’t always bloom at the right times anymore, another consequence of climate chaos. Last week I found the first dead hummingbird ever at my front door, and I think it was the one I photographed the day before, struggling to fly and feed.

You almost never see a hummingbird sitting still to feed. This little one was crashing about in the flowers all morning, clinging to stems while trying to feed, and tangling in the potted plants, most unusual behavior. Was she too young? Or too weak, or injured, or what?

Another hummingbird kept diving at her, and I first thought it was the usual mine!mine!-aggression they all display while protecting a food source or territory. But the struggling bird didn’t seem to mind the other one, and when I followed them into the honeysuckle (with binoculars) it looked as though the strong bird was trying to feed the weak one. Were they migrating together?

Everywhere she flew this other bird followed, at times flying up underneath her as though for support or encouragement. Something was very wrong. It looked like the little slow one had a tuft of feathers sticking out where there shouldn’t be one, as though she might have an injury. It’s possible that this bird was snagged by a cat claw, or perhaps hit a window, or was in some other way compromised.

It was one of those heart-wrenching moments when you wish there was something you could do but you know there’s not. Though she was flying badly she was still too fast for me to catch. And if I had, what then? So I left her to her fate, which I suspect was to be brought to my doorstep the next day, intact though darkly damp from cat saliva. I feel bad about that. These are the complex paradoxes that keep us dancing on our ethical toes.

Every choice we make has consequences, some (or most) of which we never fully know. Know that if you choose to put out hummingbird feeders, there’s only one right way to do it: Keep the feeders sparkling clean all summer, and keep them up til all the migrants have flown through your area. With habitat fragmentation, compromised migratory routes, and climate chaos all throwing anthropogenic challenges at these energetic little jewels, the least we can do if we choose to feed them is to do it right, helping rather than harming them. 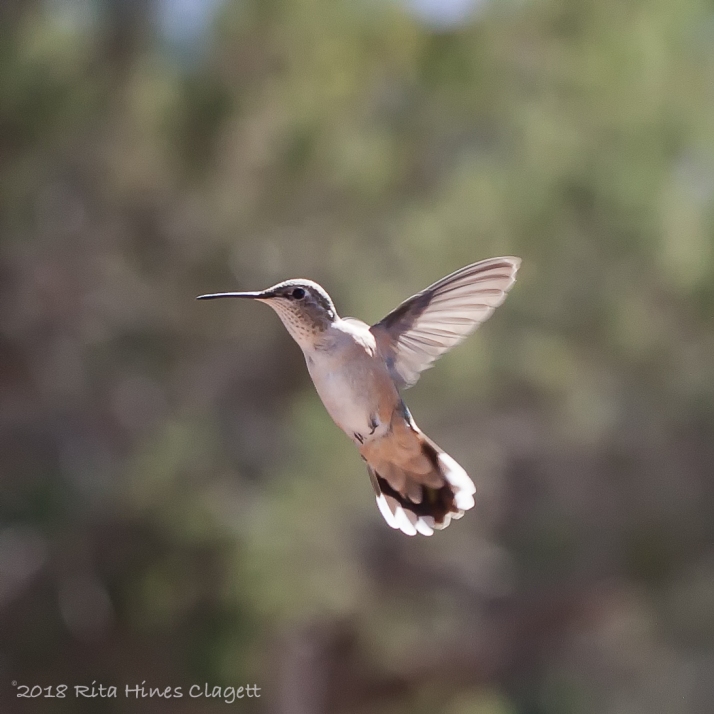