First a word about my breakfast. I am so aware of where my food comes from. I realize it might seem off the deep end to friends in other places, other lives, other worlds. But here, in this fertile creative valley, it feels so easy and right to be mindful of every bite. Or nearly. Time to focus on slowly consuming what’s in the freezer, because in a couple of months or less we’ll have half a pig to put in there. I found a couple of rolls from Monica’s brick oven bakery, so I thawed and toasted them. Pamela’s hens are laying and I’ve got a dozen fresh eggs. Suzi called the other night and squealed “I picked up your birthday present today!” That’s when I started thinking about a homemade eggamuffin. She’d asked me a few weeks earlier which part of her pig I would like for my birthday present. Bacon! I cried without hesitation.

This year when friends announced a joint birthday party for Elena and me, she said “no presents.” Great idea, I thought. I have too much stuff! But I’d already told a couple of friends all I wanted was socks. Socks used to be a bit of a disappointment at Christmas. Imperceptibly over the years I came to appreciate the gift of socks. Maybe it began after my mother died and I no longer routinely got socks for Christmas or birthday presents. Auntie sent me socks in recent years, and I’ve been delighted to get them. So I replied to the group invitation, “Me too! No presents. Unless I can wear them or eat them.” Because I suddenly remembered the fresh oranges and other gifts of food I’ve received since living here, and I didn’t want to discourage more of those. So it was a meaningful breakfast, chock full not only of pure and local nutrients but also full of neighborly friendship and love. A fulfilling and tangible taste of community. Yum.

The lettuce was store-bought organic. The garden is crazy early waking up, but no edible greens yet except the early blue mustards, whose bright green rosettes are popping up in vibrant patches as the snow melts. All manner of other little green shoots are poking up or unfurling, crocus and iris leaves, miniature daffodil tips, curly grape hyacinth leaves, and the hardier perennials like Ratibida, Gallardia, and columbines. I’ve been puttering in the garden for at least a week, and the past few beautiful days we’ve started spring cleanup in earnest.

Time to break back the columbine stalks to free the new growth sprouting.

It’s only been a couple of weeks since the snow has melted off the front of the hoop house, and when I opened it the other day I realized I should have done so as soon as the east side was free of snow. The Vidalia onions survived! At least, some of them did, and when I checked, expecting frozen ground a finger depth down I was stunned to find the dirt was bone dry. So I dragged out the hoses and watered the bed deeply through the afternoon.

I’d say maybe 35% of the Vidalia onions in the hoop house survived winter. I texted this image to David, who sent me the starts last fall from Florida. “Look who made it through the winter!” I crowed in a text.

“Their cousins,” he wrote back with this image. Hmmm. Well, but to be fair, the southern cousins did not have to contend with below freezing temperatures through the winter. 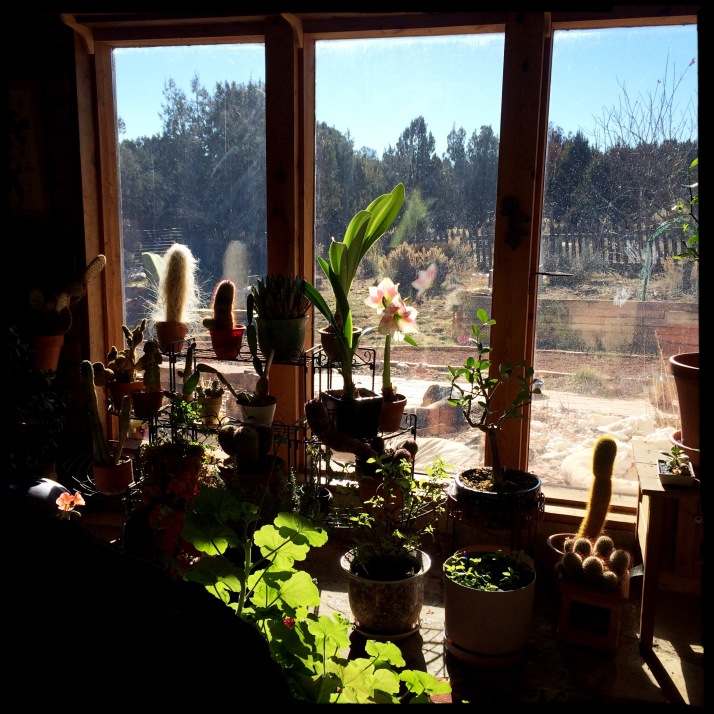 Three years worth of amaryllis add color and structure to the sunroom in winter. I can’t eat it or wear it, but each year a friend gives me one for Christmas. This year’s amaryllis popped open this week, while the other two are growing great green leaves. One of them bloomed twice last summer out on the patio. Raven, all well again, naps outside the windows.

With all this rejuvenation in the garden I was surprised to notice in these recent warm days that there were no bees coming out of the hive. I went closer and listened; no buzzing from inside. I realized with mixed emotions that the hive had died. Deborah came over yesterday afternoon to help cut back penstemon stalks and other seedheads, and we embarked upon the adventure of opening the hive, which revealed a Bee Tragedy…