The very first European pasqueflower attracted a few bees a month ago.

One day in early March there were about a dozen honeybees exploring the little irises. This shot clearly shows the concave pollen basket on her back leg.

A bleak beginning to bee season had me worried most of this month. After a few honeybees dipped into the first spring crocuses in February, and a few more came for Iris reticulata earlier this month, there were no bees in my yard for weeks. Meaning, more accurately, that I didn’t see any, and I was looking. I checked the irises, the pasqueflower, and the silver buffaloberry daily; I glanced at the first few almond blossoms as they’ve opened this week, and nary a bee, native or otherwise.

But at last the silver buffaloberry is in such bloom that even I can smell it, and I stood under it this morning feeling my first real sense of joy all month. The tree is full of bees: all the honeybees have nearly identical oval packs of pollen on their back legs, incidentally the exact same size as the unpopped buffaloberry buds, and they won’t sit still on a flower. If they’re not just skimming they’re crawling, even ambling across the clusters of tiny yellow blooms, gathering while they may their ample pollen. Plus there are clouds of sweat bees, a few mining bees, and a large black fly or two. 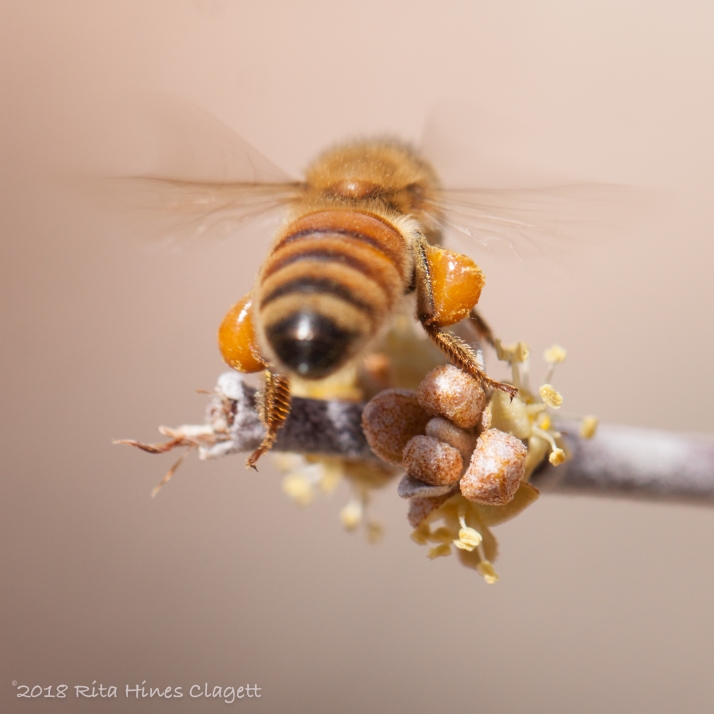 After an anxious month observing a paucity of bees, I was thrilled to stand beside the thorny buffaloberry in a fertile buzz of native and honeybees. 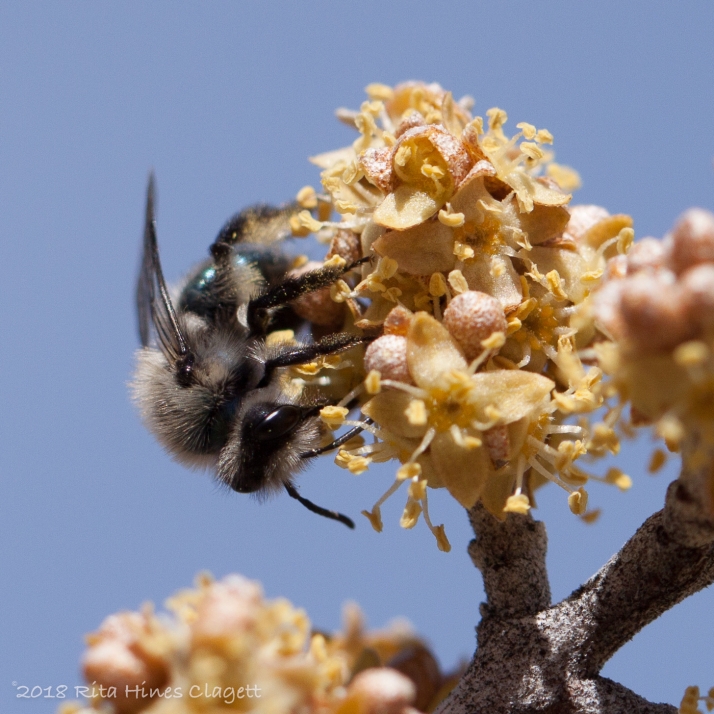 Andrena, or mining bees, are known as a spring bee, and are valuable spring crop pollinators, including fruit blossoms, apples and almonds in particular. However at Mirador this week, there are way more Andrena on the buffaloberry, above, than on the almond tree, which is happily buzzing with honeybees.

The almond tree is getting tall enough that I can capture bees from the deck above.

I never thought I got all that depressed here in the winter. I think of it as my hibernation, but I’m usually pretty content. This year, late winter, after we’d had barely any winter at all, I found myself getting testy, snappish, and feeling downright dead inside. There were a lot of reasons I could suppose, but the return of the bees has so lifted my spirits that I know part of it was anxiety about their whereabouts. As the garden is coming rapidly back to life, so too is my soul resurrecting.

The native bee house filled up beautifully last fall, and I can’t wait to see the bees emerge.

Sandhill cranes have been flying over most of March, sometimes in the hundreds, definitively trumpeting spring. The flicker in my eaves drills most mornings on the cornice, alarming out insects for her breakfast. Songbirds returned gradually over the past month and now serenade each sunrise.

The redtail hawks are finally sitting on their nest by the road, but nobody returned to the canyon cottonwood this spring. Concerned last summer when the nest appeared abandoned, I watched through the seasons, the weathers, the winds, as my hypothesis proved true: Over time the far side of the nest sloughed off, and by last fall there remained only a small cluster of twigs around the southwest anchor. I surmised it was a young pair of birds who simply hadn’t constructed the nest securely enough, and that a big storm blew out the back of it, dropping the eggs down the canyon side before or just after they hatched.

The leeks I left in the ground over winter are four inches tall and bright green. The leeks I left in the refrigerator all winter are just an inch behind! The last leek harvest was mostly small doubles, and I cut their tops off and stuck them in a bag in the fridge, intending to use them. But they slipped to the back and by the time I found them they were a little shriveled, and I put off using them. I looked at them a few more times through winter, and couldn’t bring myself to either cook with or compost them. Late February I pulled them out to dump in the compost, and found green sprouts emerging, so I split them up and planted them. And they’re coming along fine!

Meanwhile, I’ve still got a beautiful fifty-acre field for sale. I had hoped I could sell it this week to a lovely retired couple, dreaming of doing the very thing with it that I had intended to do when I bought it, before my health and strength fell short of what is needed to nurture that land into a thriving subsistence homestead. When I think about that field’s short history in my life, and its significance to me, and the fact that it is my 401K, I just can’t part with it for 20% under asking price. The domestic water tap alone is worth between $15,000 and $20,000, and water is of course the essence of life everywhere, but especially here in the high desert. At some point, the fact that it’s in conservation easement and borders a 105-acre protected wildlife sanctuary, will be an asset rather than an encumbrance. The perfect buyer will come along, I’m sure of it.

In the meantime, the Dutchman next door intends to fatten up the field with fresh fencing and cows to fertilize and plow the ground. Not selling it this week isn’t the worst thing. And the sense of rejuvenation I have this Easter season, with the advent of the bees, allows me to breathe easy despite my disappointment. Anyone out there “looking to move farther up the watershed” as one new farmer here from California said, call Bob at westerncoloradorealty.com and check out this gorgeous, peaceful piece of paradise.

The field in spring, and below, after a successful haying season. 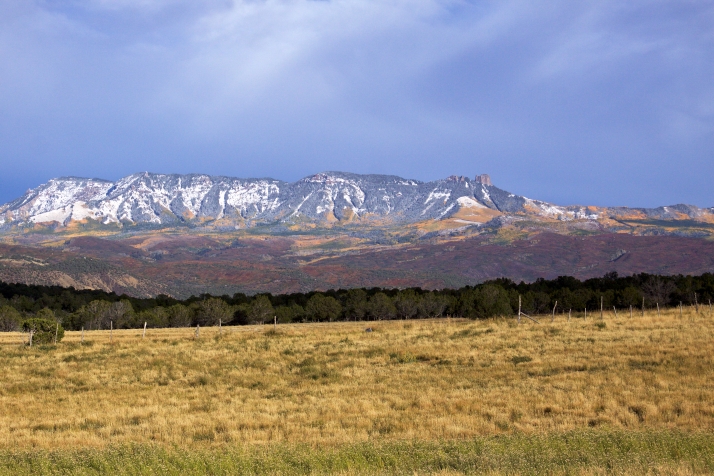