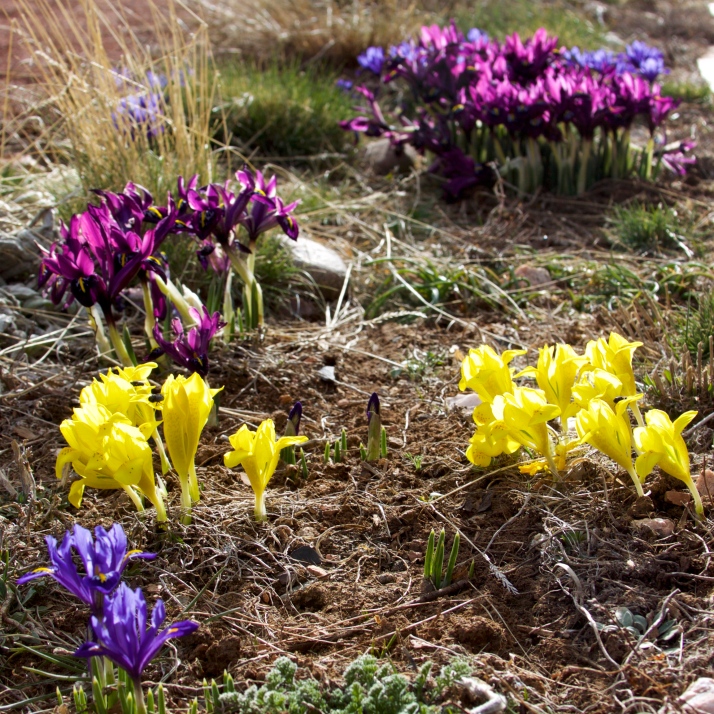 Brief glory Iris reticulata varieties, budding and blooming between the challenges of single digit nights, blowing snow, and someone biting their little heads off.

The big winds we had Sunday and Monday must have blown open the mechanical room door. I hardly went outside the whole 48 blustery hours, after battening down (almost) all the hatches in the hours before the “wind event” started. Once the clouds cleared the night dropped to nine degrees, and the water pipe between the pump and the pressure tank froze. When I woke yesterday morning all I knew was that there was no water in the house.

Here is an instance where I can recognize the benefits of daily meditation. I said Oh, and was glad I had filled the pitcher the night before, poured some for the cats and the coffee kettle. I broke the thin ice on the pond to bring up a bucket of water to flush the toilet. Suddenly the orchids I forgot to water the previous two days were in desperate need. I left a faucet open while I meditated, and when it began to trickle I ran all the faucets one by one. Once they were all primed I felt competently satisfied. A little later I heard a strange sound: out in the room with pump, water heaters, solar controllers and batteries: a geyser shooting at the north wall!

I flipped the pump breaker and shut the valve to the house. I realized later I could have run inside and run water into the sinks to help empty the pressure tank, cutting down the flood in the mechanical room. But I never felt the frustration and blame I once would have in this situation. I called my regular plumber. He was swamped, but said he’d come at the end of the day if I couldn’t find someone else. I called a number of plumbers, spoke to several pleasant people, and found one happy to come by around four. Then went back to work. All with remarkable calm.

I knew I washed my hands a lot during a day; I was more amused than frustrated to note just how many times I reached for the faucet or wished I could. Oh the sweet relief of hot water and soap! I felt so grateful to be able to wash the dishes. I had a lovely day despite the in-house drought. And I filled the pitcher and watering cans just in case last night.

This morning I was still thrilled to have running water! I tried out this turmeric lemonade recipe: 4 c. cold water, 2 T powdered turmeric, 4T maple syrup, and the juice of one lemon. Eh. I added the juice of one whole lime and a splash of cayenne, all in a quart jar, shook and chilled it and shook before drinking. Yum, finally! I’ve tried the capsules, but can’t even remember my regular vitamins half the time; I’ve tried the golden milk but don’t want to mess with that at bedtime and don’t really care for the flavor. This will be a great tonic to sip on throughout a hot summer day when I’m in and out gardening. 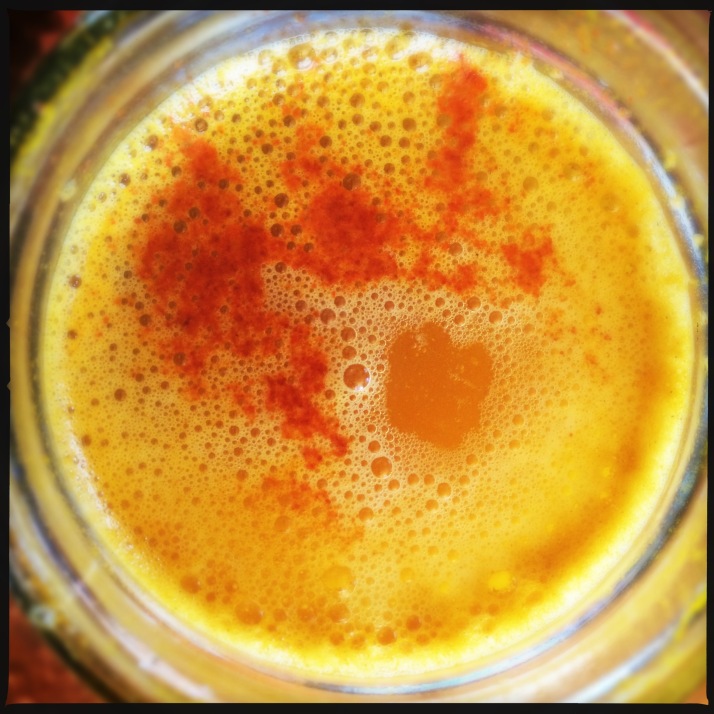 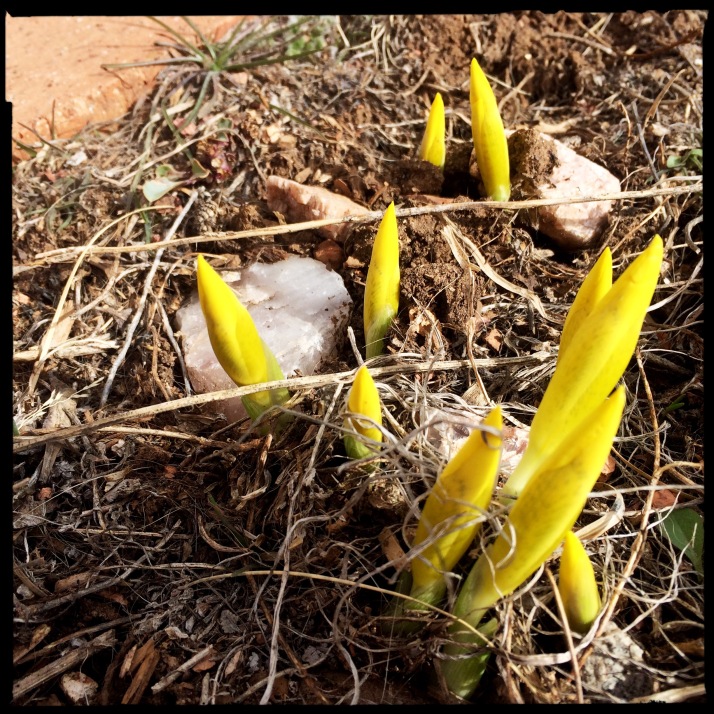 Little yellow irises were just getting ready to open when a late February snow buried them. They waited just so for a week before it was warm enough to open. Below, the purples at ten am, and an hour later. 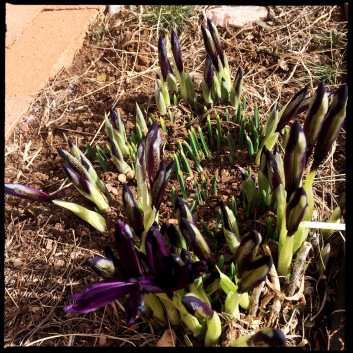 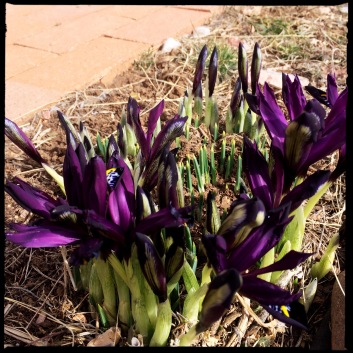 … and an hour later. 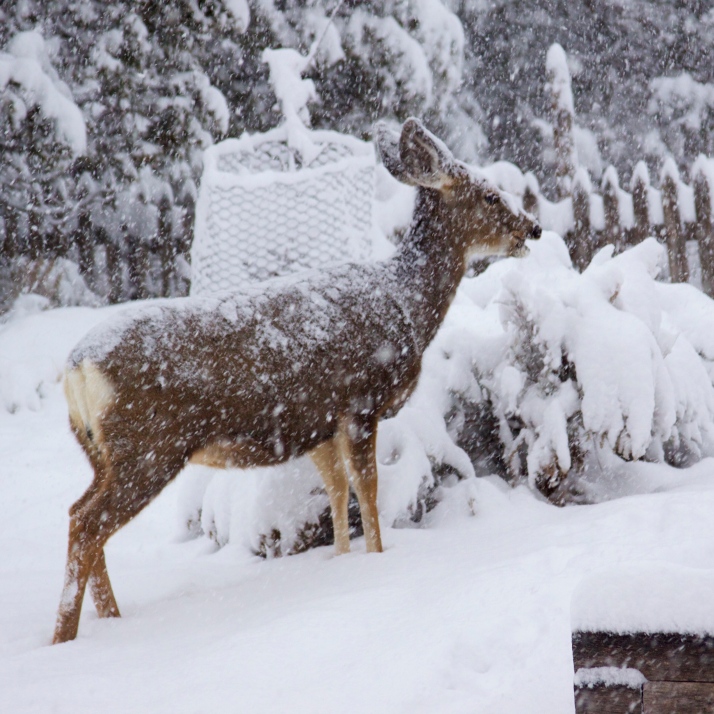 OK, this happened in December, but it sure felt like this when snow blew in while the buds were trying to bloom. Then perhaps this same doe came and ate their tops off.

In between editing audio meditations and video yoga, I’ve been getting outside to dabble in the garden again, on mild days for the past month. The first slow flat stretch of the roller coaster has begun. Cutting back dried stems, mindful of possible preying mantis or other egg cases; raking winter windfall leaves and snowbreak stalks, pruning broken limbs, trimming thymes, pulling off old iris leaves where new green tips stick up. Clearing the early-spring bulb bed. These first splashes of color signal the end of winter. We’ll see more snows, maybe some big snows, but they’ll melt within a few days and the flowers will appreciate the moisture. As sure as anything, there’s no stopping their reach for the sun. 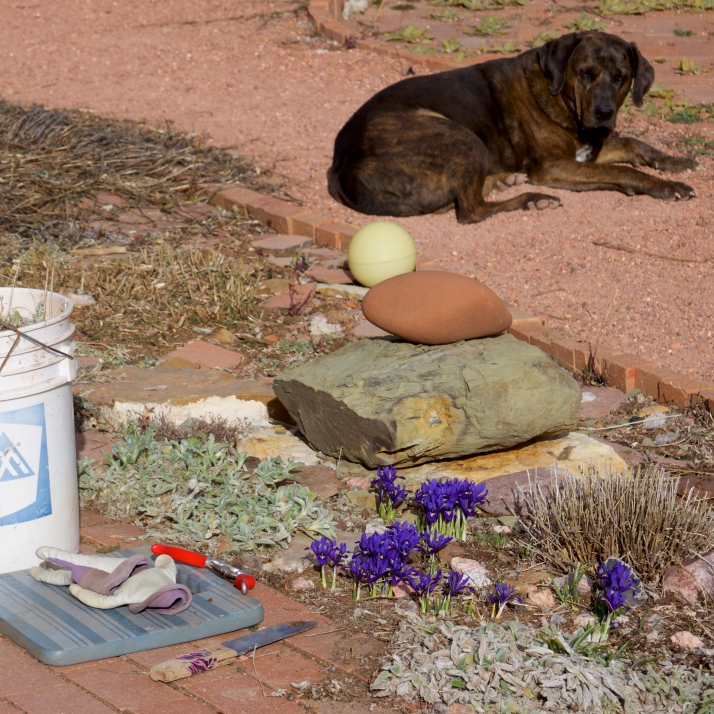 The Right Tools for the Job.

2 thoughts on “Spring as Sure as Anything”