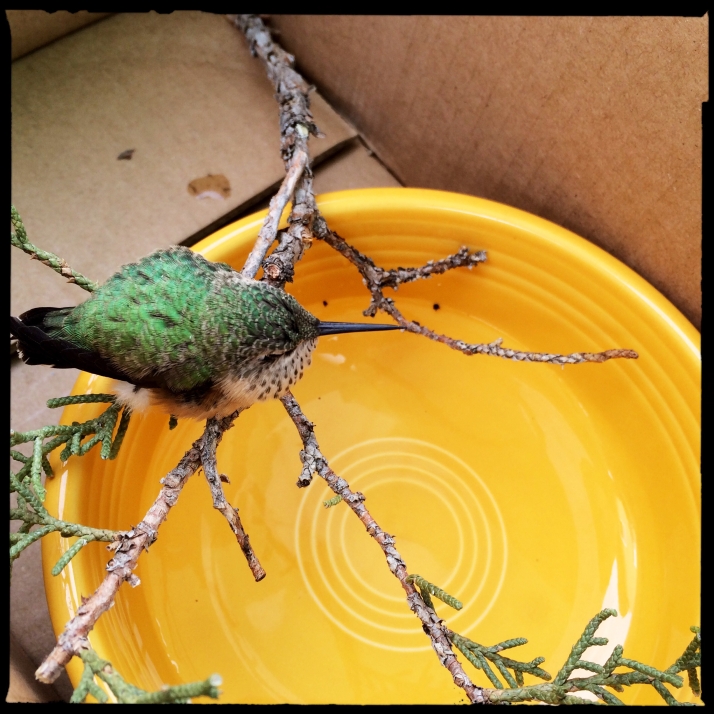 The other morning a baby hummingbird hit my big picture window. I went outside and it was face down on the concrete with its wings spread out in two triangles, tail in the air, its little beak on the ground.

I picked it up and it fluttered, and feebly grasped my finger with its tiny claws. I found a box, put the little bird onto a stick, put a bowl of water in the box with it, and closed it up for awhile. I checked a few times and the little bird was just sitting there fluffed up.

After about twenty minutes total I checked again, and when I started to open the box, there was buzzing inside and the little bird zipped straight up as soon as I got the flap open, and buzzed around under the patio umbrella like he couldn’t find the edge. So I scooped it softly out from under the umbrella and it flew off into the trees. Sometimes all it takes is a rest.

I stopped by a new friend’s house for the first time, and noticed his hummingbird feeder had black stuff in the top of the bottle. I asked if I could share my expertise with him, as he had recently shared his (art) with me. He thought I was going to give him tips on his painting, and was surprised when I said “You need to take that feeder down right away and scrub it out.” I shared a link with him later, explaining how important it is to keep your feeders clean enough that you’d drink from them:

“Please Note: If you do not follow these instructions, you could be responsible for giving Hummingbirds a serious and deadly fungus infection. This fungus condition causes their tongues to swell, making it impossible for the Hummingbird to eat. Ultimately, they die of starvation, a slow and painful death. Please do it right or don’t do it at all.”

The site gives great instructions for how and what to feed, and how and why to keep food fresh and feeders clean. Over the course of the summer I’ve seen some dismaying hummingbird feeders around the valley, with black walls or cloudy nectar, and even cloudy red-dyed nectar. I thought everybody knew by now not to add that red dye. Why do they even sell it? Of course, I always think that once a problem is identified, the people in charge will do the right thing and fix it. Like income inequality, and climate change. But we as a species just seem to keep digging ourselves in deeper in both those arenas, despite knowing better.

One small thing we can do is not kill off hummingbirds, who face enough threats including habitat loss, pesticides, feral cats and window collisions, without us poisoning them with poorly maintained feeders. It’s quite a commitment to do it right.

Most of the hummers have left by now, but there are still a few flying around the flowers and the feeders. Most mornings are nippy. Fall is definitely on its way. I heard last night that the oak brush up on Black Mesa is flaming red, and just a few aspens have started turning. The cottonwoods in the canyon have a few patches of yellow leaves. Purple asters complement the abundant wild sunflowers. Winter squashes are ripening.

Late summer surprise! I’d about given up on the winter squash vines; nothing but tattered leaves were growing in the raised bed. But pulling weeds around the back side of the beds I found one decent butternut squash…

…and one huge Long Island Cheese squash! The Rocky Mountain Beeplant surrounding the squash is a great source of nectar for both bees and hummingbirds. It self-sows readily, and is easy to recognize and pull up where you don’t want it.

2 thoughts on “Hummingbird, Please Fly Away, Fly Away!”