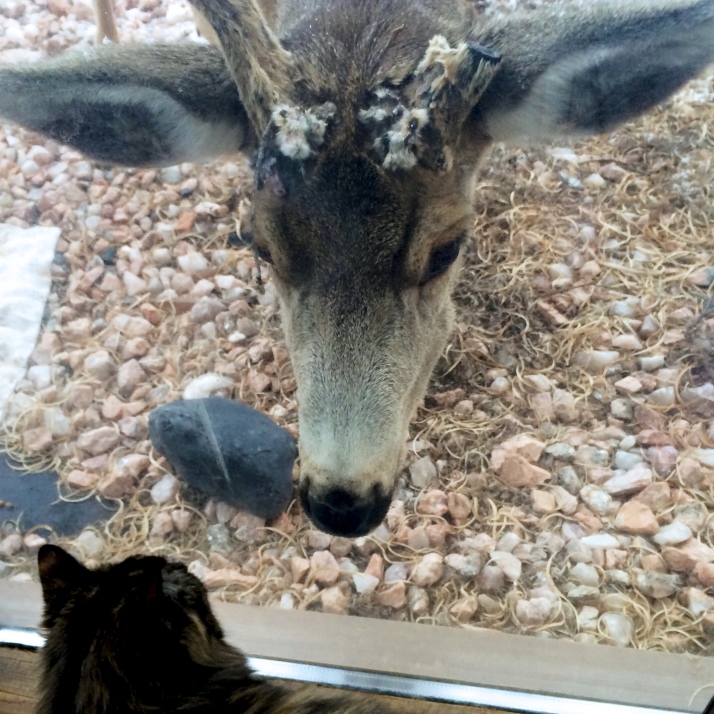 On a recent window patrol, Topaz goes nose to nose with an even larger animal. What is wrong with those antlers?

In a way, I’m glad the kittens have noticed the birds. They’ve spent their days the past week lurking in various windows, tensed, tails twitching in time with whatever music is on, watching juncos peck around the ground near the house for crumbs leftover from fall: dried rosehips, tiny purple-black foresteria berries, catkins scattered by the nuthatches and finches feeding in the birch tree, lavender; who knows what they’re finding in this deep and steady snow. I took down the bird feeders last summer, when I realized that I would eventually let these cats outside.

I vowed years ago not to have an outdoor cat again. Then Little Doctor Vincent showed up bleeding under a juniper three days after I buried Dia the psycho calico, and a couple of years later Little White Mikey arrived the night after we gave Little Bear his aerial burial. Both were happy to come inside but they knew their birthright, so I compromised by putting bells on them. Mikey vanished after only nine months, and was more like a ghost than a real cat anyway. Vincent lost a five-dollar collar about once a month, so after a year I gave up on that. He didn’t really hunt birds much so I was lucky. After Vinnie died I renewed my vow, tending only to my sweet old orange cat Brat Farrar, who had always been content to live inside, and refusing several offers of lovely indoor-outdoor cats.

Then the little hoes showed up. They both really want to get outside, and though I intended to let them loose after they were neutered in October, for various reasons that hasn’t happened yet. We experimented last summer and fall with a few short forays. Ojo would stick around and even come when I called, but Topaz made steady oblivious progress each time toward the perimeter fence, and the prospect of losing her into the woods unnerved me. So then we tried some leash walks, which went better than you might expect. Though Ojo objected strenuously at first, Topaz got the hang of it pretty quickly and could be led.

Keeping them in whenever anyone else went in or out the door became challenging. The mud room served as an airlock chamber for the front door, but the back door required agility and speed to prevent escape. Then I went away for a month, and when I returned they were out of the habit of trying (imagine here a whole paragraph of speculation as to why). A week later the snow came, and since then they’ve shown no inclination to leave the house. I try to brush each of them at least once a day, and vacuum a few times a week; still, the hair spills out from under furniture, piles into drifts on the stairs, tickles my lips when there’s no kitten near. They’re very skillful at rampaging through the house, from one end to the other and back, around the couch over the piano up the stairs off the wall and back, without knocking much down; occasionally the brass bowl crashes off the piano or an orchid tips over on the stone wall, but for the frequency and velocity of their chases incidents are acceptably rare. Still, they need more space to run. 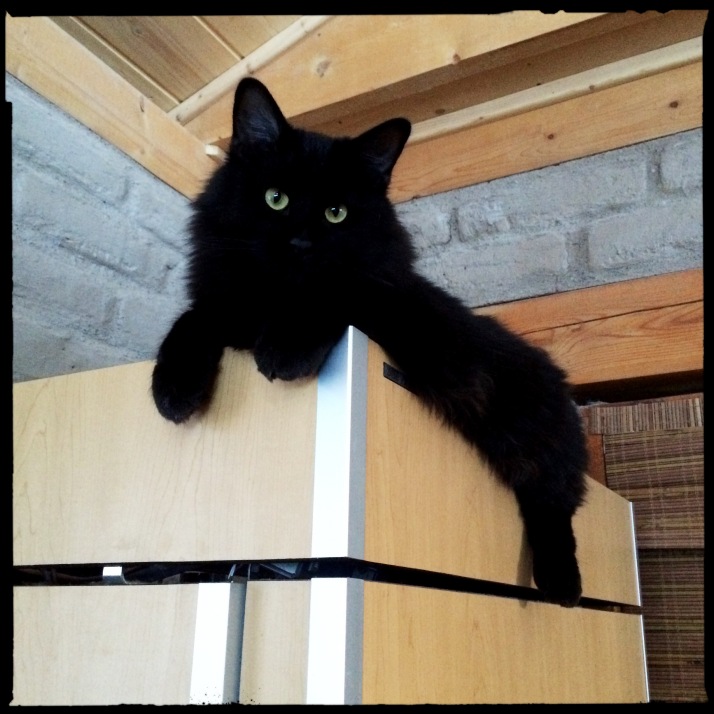 They’ve begun climbing to places they shouldn’t be, like the top of the refrigerator which has no top; all its guts are up there, open to the air ~ and cat hair, and mischief.

So as the snow melts this spring, and before the garden foliage gets so thick I can’t see them, I will let them out. Therefore, I’m not feeding the birds this winter, and though I miss the sound and sight of their flocks at the feeder tree, I’m glad I have one fewer path to shovel in this big snow winter. With no bird feeders-cum-bait station, they seem to be finding plenty of natural food that perhaps they’ve ignored during previous years when they were provided with a bottomless supply of sunflower and thistle seeds. 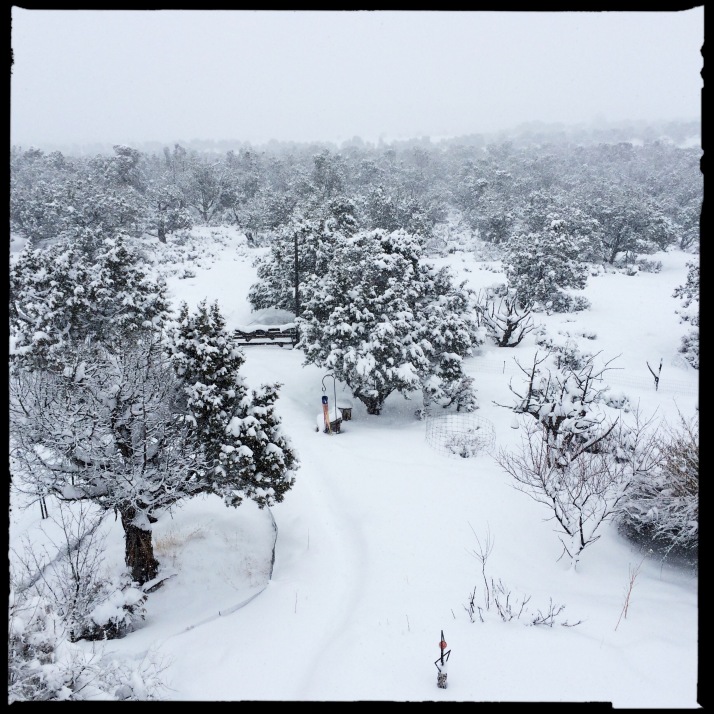 A foot of fresh snow and counting on top of the foot that barely melted. My dimly visible path to the back gate and compost that I shoveled twice yesterday is ready for another effort. We’d all rather just stay inside.

The snow continues to fall, the cats run from one window to another focused on birds and occasional bunnies. I don’t wish them to catch the birds when they finally taste their freedom, but noticing them is the first step in learning to hunt, and I do want them to hunt mice and chipmunks, and frighten squirrels and bunnies out of the yard come summer. I’m hoping now they know there’s prey around the house they’ll stick close when I release them, and not go running off into the forest. We’ll all compromise: I’ll try bells again and the kittens will take only what their hampered abilities allow them, hopefully not birds; I will break my resolution and have outdoor cats again, but not lure the birds to an easy death with feeders. 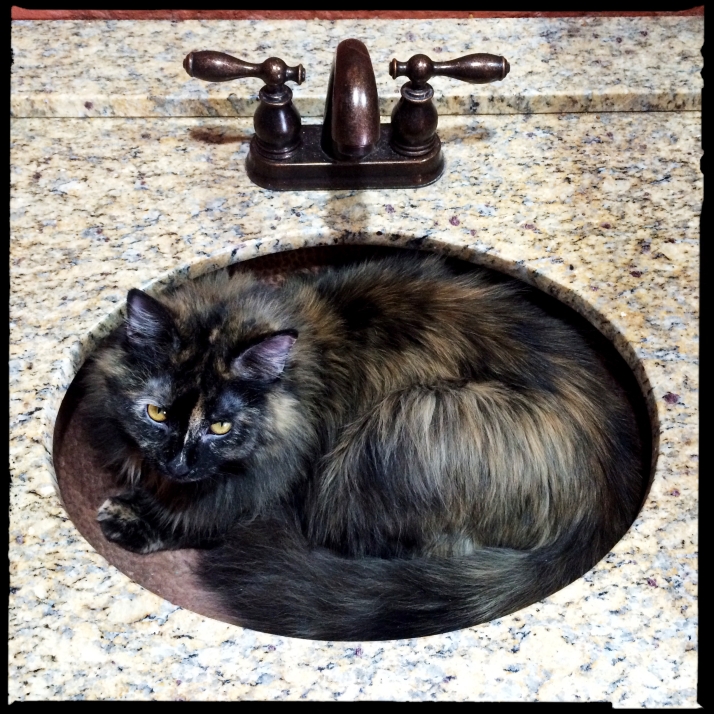 Meanwhile, we’ve discovered the true purpose of the copper sink. 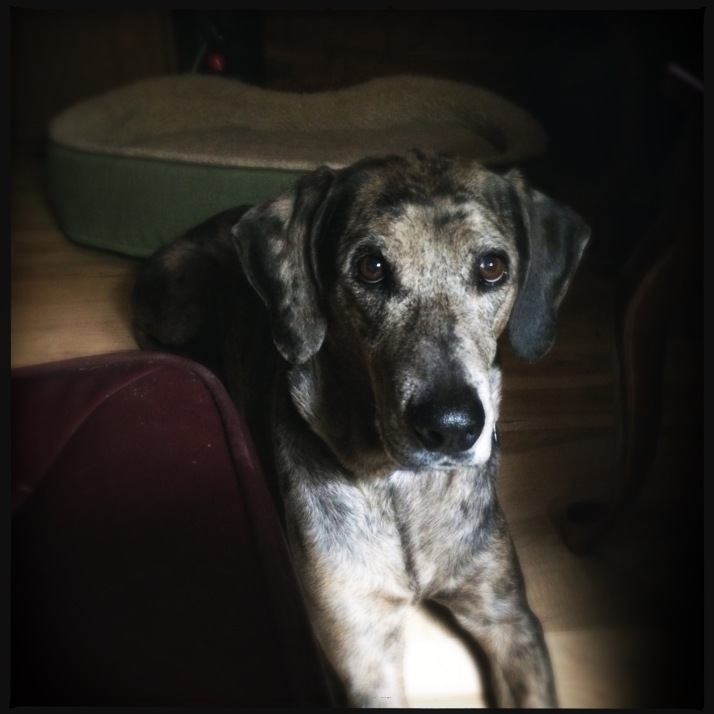 As for Raven, the first sign of true improvement came four days after the poisoning when she lay at my feet waiting for Last Bite. 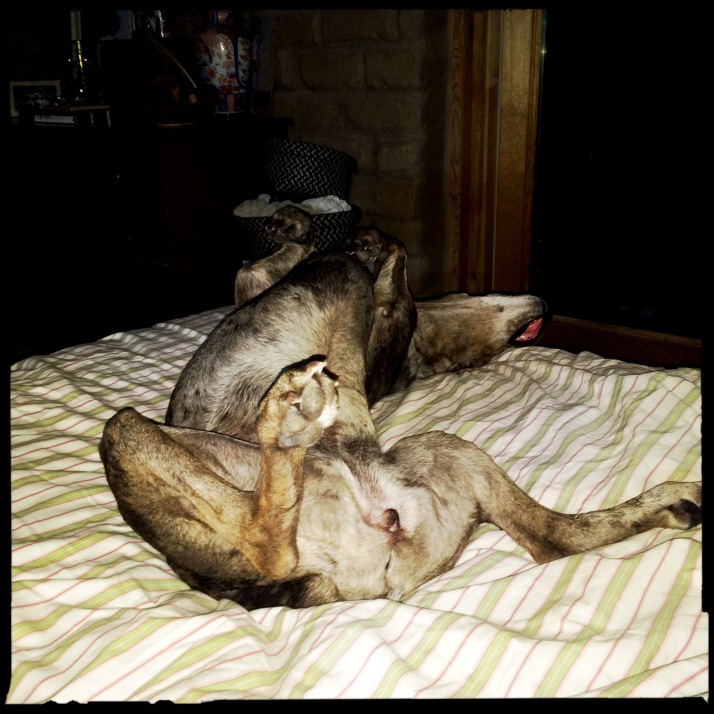 The next morning I began to have confidence that she’d be fine when she rolled on her back for the first time since almost dying. Within a week she was back to her old tricks, eating anything her mouth came across. She remains under strict supervision. 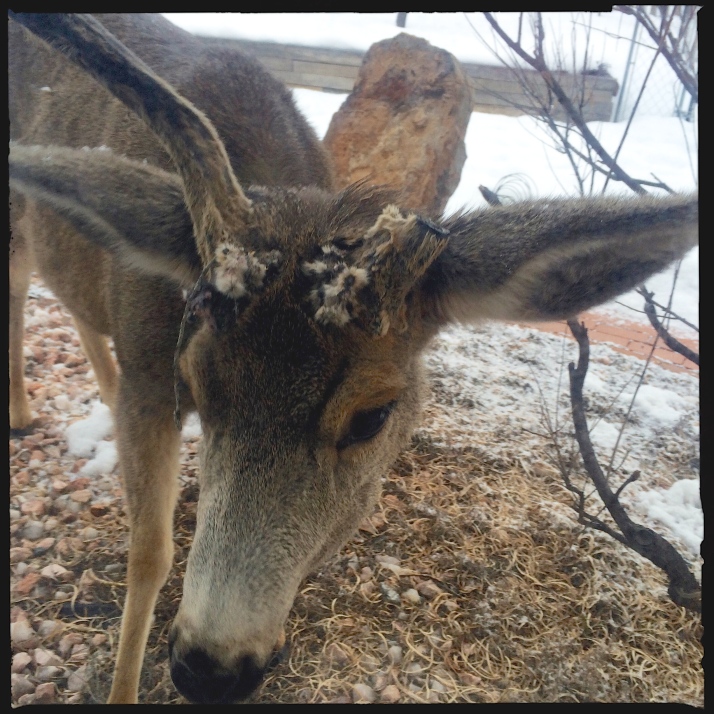 And what IS wrong with this buck’s antlers? We’ve observed him in the neighborhood this winter and wondered. He finally came close enough for me to get a good look. A piece of twine tangled into the base of his one remaining antler, which never shed its velvet, hangs over his right eye. His other antler has been sliced off clean. Masses of fur and flesh looking rotten and raw cluster around his pedicels. As he looked through our window at the cat, then at me, I felt his story: he got caught in someone’s garden netting or hammock or something, and in extricating himself sliced off one growing antler and tangled the bases of both so hopelessly it stunted the growth of the other and resulted in these fungus-like wounds. Or maybe there is fungus growing around the traumatized tissue. I hope that when it’s time to shed he drops the whole mess and can start fresh next season.

One thought on “Indoor-Outdoor Winter”