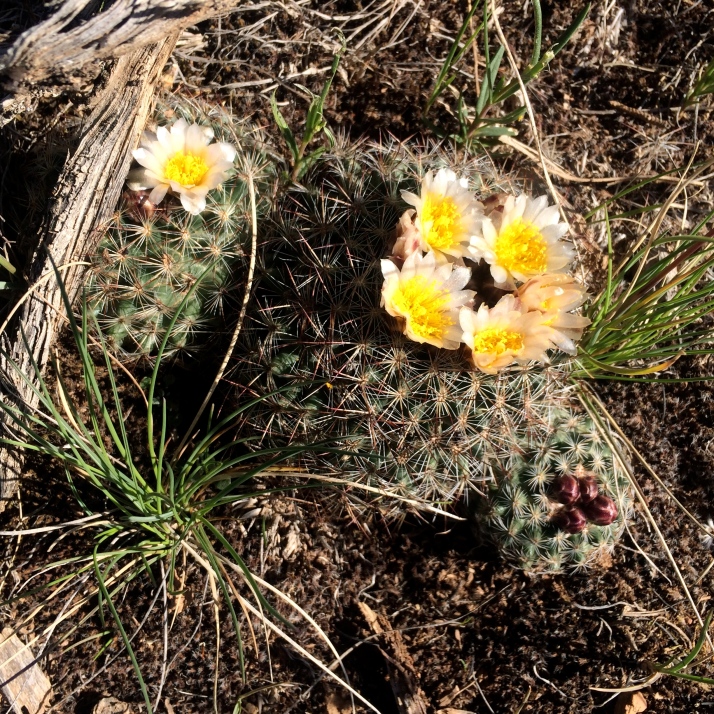 The first cactus blossoms on a walk to the canyon.

I thought I’d upgrade my phone, so shopped around for the best deal on phone and server, and chose to switch to Virgin Mobile from AT&T for a couple of reasons: Over the course of two years, I’d save a bunch of money, and the service is better in the remote valley where I live. I could even use my cell phone inside my home, instead of having to step outside and angle for decent reception. I was thrilled to open my new iPhone 5. There’s no denying I’m an Apple fan; the products are elegant in every sense of the word, and customer service is beyond reproach. 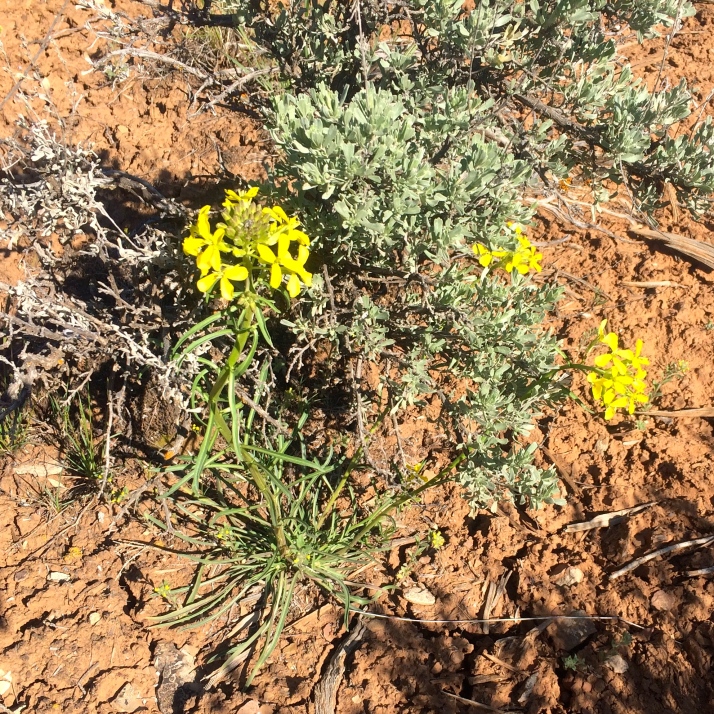 The first wallflowers bloomed a week ago, early according to my records.

After a great setup experience at the small local cellular store, I returned home to find that the sleek, sexy phone would not sync with my computer. Every time I tried to open iTunes with the phone plugged in, iTunes “quit unexpectedly.” After five hours of troubleshooting on the phone with a total of five Apple techs, the last one patched me in to Virgin Mobile support, and my wasted afternoon turned into a customer service nightmare. The upshot of it all is, in order to get another brand new phone from them rather than a refurbished phone I have to mail them back the phone at my expense, and only then will they credit my card. Then I can buy another new phone from them. They refused to email or text me return instructions and transaction numbers, which feels shady to me, insisting I copy them down over the phone; I wonder if I’ll get my not insignificant amount of money back at all.

I kept my cool the whole five hours with Apple tech support. I lost my temper pretty quickly with the two Virgin Mobile reps I spoke with. For one thing, their Hold Music, of which I heard a lot, was so jarring, a repetitive jangle of a few bars of hard music interspersed with various bands announcing with commercial radio enthusiasm “Hi! We’re some band you never heard of! You’re listening to Virgin Mobile Live! Stay tuned!” on a staticky connection. The main guy I talked with, Paolo, was the most obsequious long-winded person I’ve ever encountered on a service call. I can’t even repeat his redundant blather. And I have to ask myself the difficult question, did their challenging accents contribute to my frustration with them? Am I biased in favor of native-English-speaking customer support? 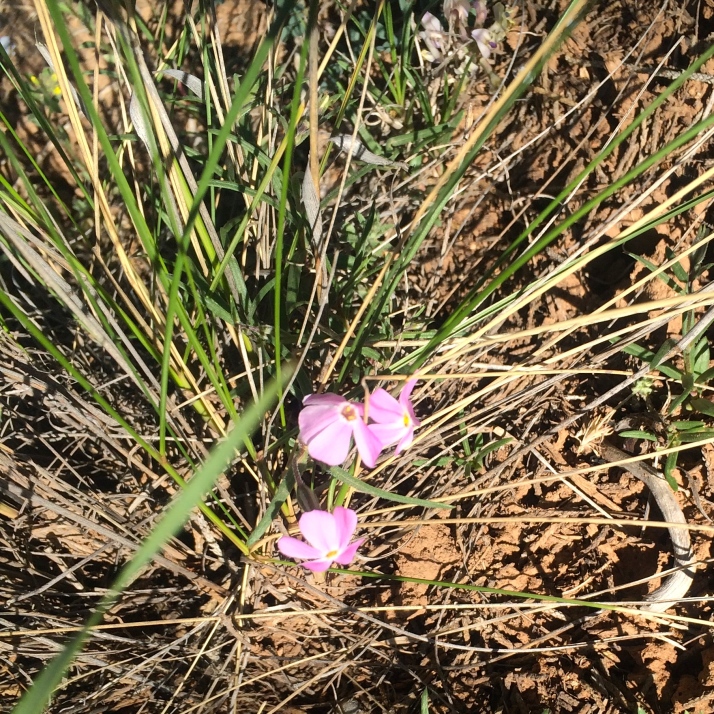 The wild pink phlox opened a few days before the wallflowers. Most of the May flowers started to open in April this year. Not really a surprise given the mostly mild wet winter.

So knowing that today I would erase the little I had added to the new phone and send it back, I took it out for a walk last evening to check out the camera. One reason I wanted this new phone, after almost four years of immense satisfaction with iPhone 4, is that the camera is supposedly significantly improved. I also needed more memory, because I became a fan of apps like the Audubon Field Guide to Butterflies, and Peterson’s Field Guide to Birds of North America. They take a lot of space, and I need more than most people for photos and videos, too.

Ice Canyon shot with iPhone 5 on the new Square setting. I guess these images are better quality than with iPhone 4, but not as dramatically different as I had hoped. But at least I’ve captured the last little bits of ice remaining at the base of the cliff. And that’s a good sign of the warming season.

I liked using the phone. The camera has some nice features like a Square setting. I became enamored of square shots using the Hipstamatic app on my trusty iPhone 4 (my “girlfriend camera” because of her pink case and flirty form), and took to cropping many of the shots I take with my “husband camera” as squares also. I like the perspective. It also has a panorama setting with which I had no success, not too surprising since I didn’t bother with instructions. And it offers slow-motion video, which holds promise for a lot of fun. The rest of the phone also has some enticing new features, like voice texting, and many more I haven’t taken time to explore. 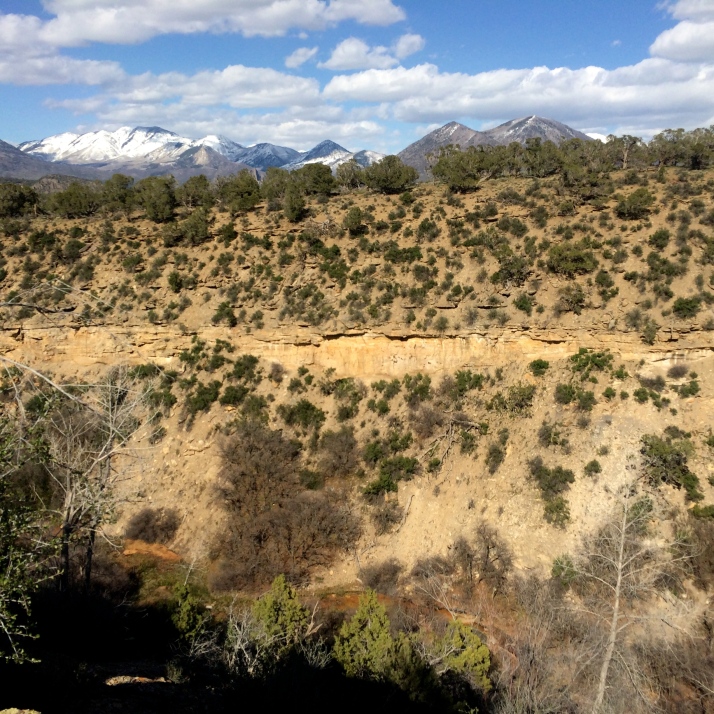 Beyond Buck Canyon, the West Elk Mountains with plenty of snow for summer’s irrigation. Not as crisp an image as I expected from the new phone. Imagine! Expecting any kind of image from a phone…

I guess I got all I could expect from any kind of fling. A fleeting infatuation and some deep disappointment. Today I break up with iPhone 5 and return to my sweet, dependable 4. Will I switch carriers back to spotty but professional AT&T? Will I try again with another and more compatible iPhone 5? Will Virgin Mobile come through despite their questionable protocol and actually return my money? And how many more precious hours of this beautiful spring season will I waste trying to find the perfect cellular plan with the right carrier? Meanwhile, as soon as it warms up a little, I’ll take that phone out for one last walk on this gorgeous morning, and see what other wildflowers I can find in the right light. In fact, I’ll try hard to see everything in the right light today.

Without my botanist friend Gretchen to remind me on our annual spring walks, I have forgotten the names of many of the native plants that adorn the forest floor. Or maybe it’s just age, or another effect of whatever is going on in my brain that’s causing the continuing dizzies. Anyway, here’s something lovely blooming out of sheer rock on the rim. 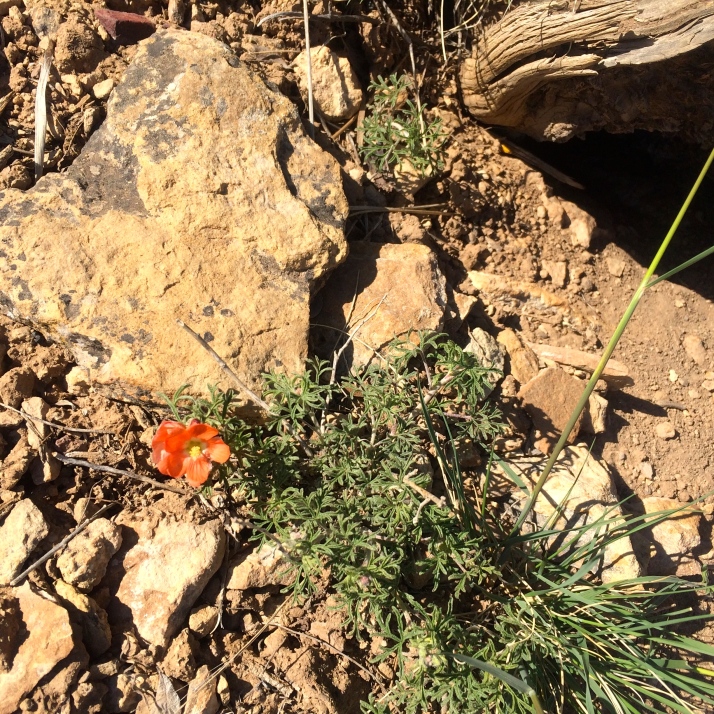 Screaming Orange Globemallow, Sphaeralcea, one of my favorites, took me quite by surprise when I noticed the first open bloom next to the snake den on the rim. 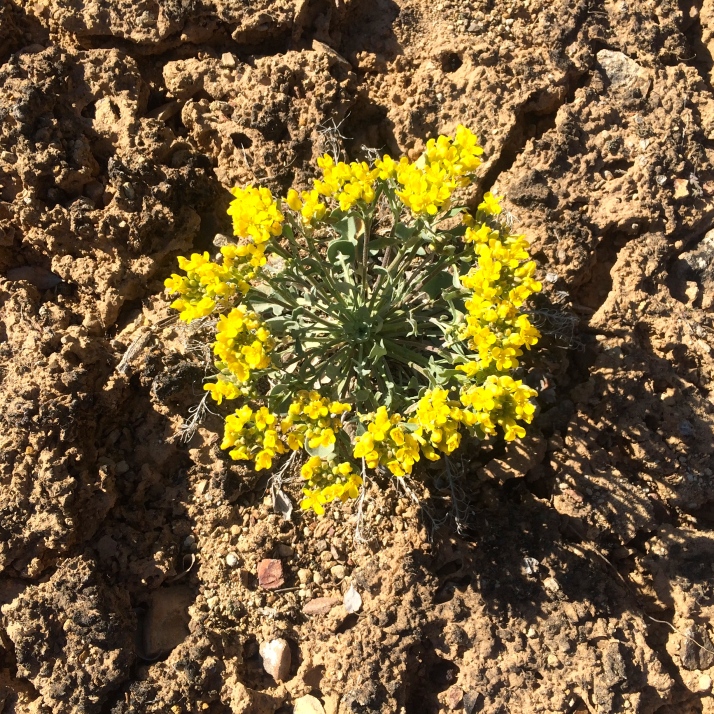 Again whose name I forget, in a perfect circle amid cryptobiotic soil beside the trail home.

A rare native plant which hasn’t come up for the past three years, Thelypodiopsis juniperorum; I’ve found five individuals in the past week, just one of the many reasons this habitat is so special.

The juniper tumblemustard above and the next image were shot with Hipstamatic on iPhone 4; all the previous images were taken with the standard camera on the new, faulty, disappointing iPhone 5. Is it really that much better? I may just stick with my girlfriend camera after all…

Snowmelt roaring down the North Fork River at the Hotchkiss bridge, with Mt. Lamborn and Lands End beyond.

2 thoughts on “My Fleeting Infatuation with iPhone 5”