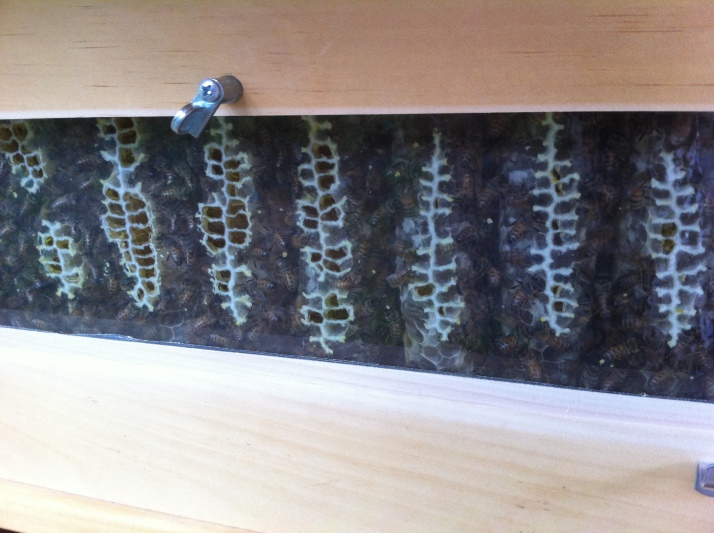 Checking the comb this morning I became alarmed at how fast they’ve reached the back, and decided to just do it, right now, harvest that one comb.

Despite how busy they were, and that it was already quite warm, I did not wear the bee hat because the jacket it zips to is in storage. I figured the bees know me by now… 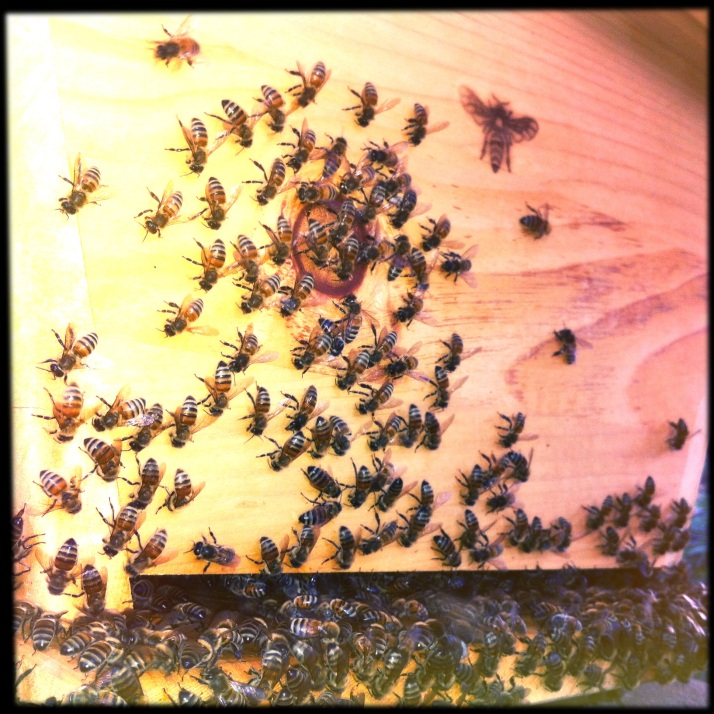 Last night I played with some of the flash options on Hipstamatic. 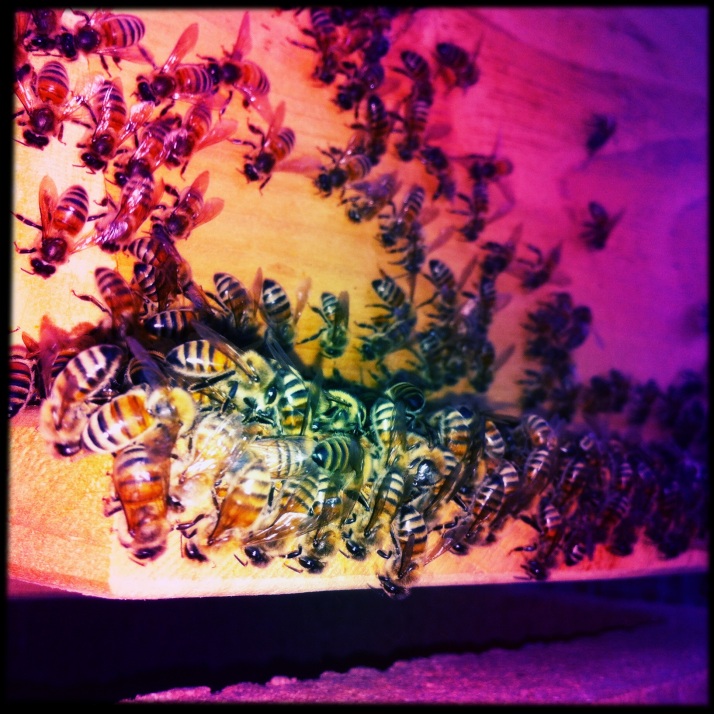 I am not Corwin Bell. I knew that, of course, but I thought maybe I’d be calm and collected enough with the bees that I could get away with rubber bands around my pants ankles, and glasses so I could see what I was doing. Removal of the roof went well. Removal of the spacer between top bars went well, using the hive tool to pry the ends and scrape the propolis between the spacer and the back bar. I pulled up the back bar first, knowing there was only a partial comb on it, so I could see what the next to last bar looked like. Then things fell apart. Literally. As I endeavored to set the bar down upside down, the comb, warm, pliable, flopped to one side, alarming the bees. One, Bitey Bee, got caught under my glasses rim, so I set everything down and pulled my glasses off, but too late. One sting. I calmly hurried inside, scraping the site with my fingernail to remove the stinger, and applied Prid drawing salve. I came back with tongs to pick up the dropped comb, covered with bees, and set it in the bowl I’d brought for my harvest. I’d also pulled my hat off as I went inside, and forgot to put it back on, so my hair was falling in a mess; as I tried to put the bar back another bee tangled in the back of my hair, so again I calmly hurried away. Stingbee’s buzzing got more and more frantic as she burrowed deeper into my hair, as I tried to shake and sweep her out. Sting two. More Prid, in my hair. After being chased away two more times (calmly) without getting stung, I finally got the bar back in place and the flat roof on without further incident.

I left the glistening piece of comb in the bowl so the bees could take their time leaving it. I wasn’t a complete idiot about it. I did call three friends to try to get backup before I started this escapade. Luckily for my pride none were available. But after all was said and done, Cynthia called back to see if I still needed help, so she got to share in the tiny, sweet, taste of honey. 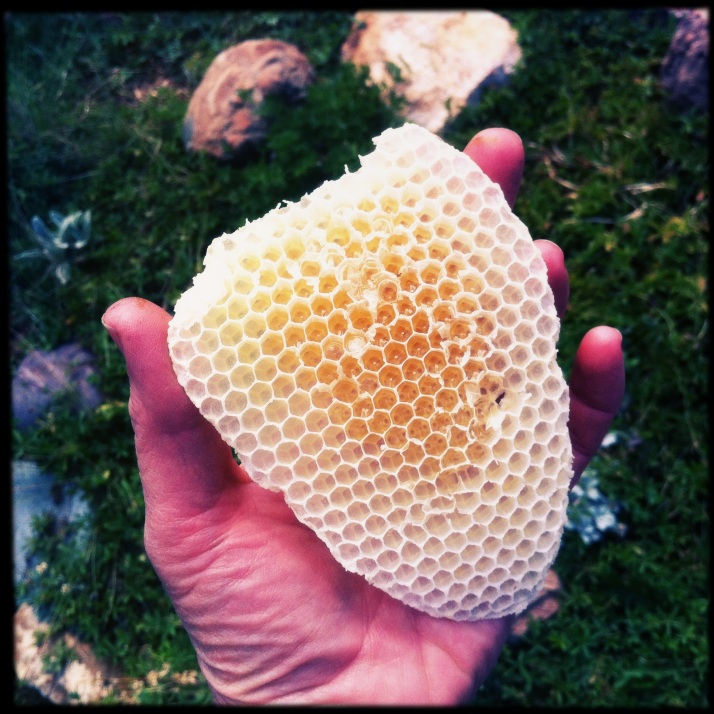 First, and accidental, harvest of honeycomb. 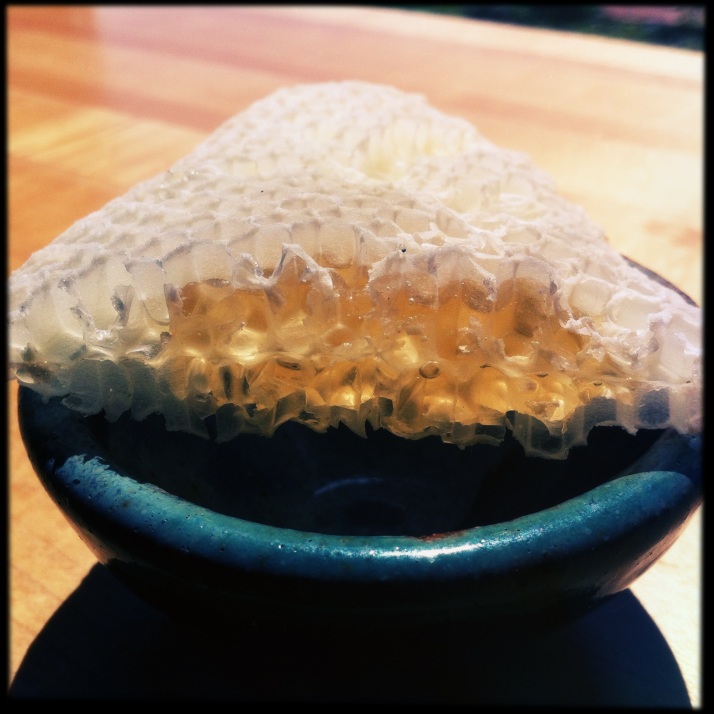 Not quite honey but almost, the nectar is thickened but not yet capped. We snipped off the tip and shared it, yum yum yum, chewing the wax like gum, like when we were kids. 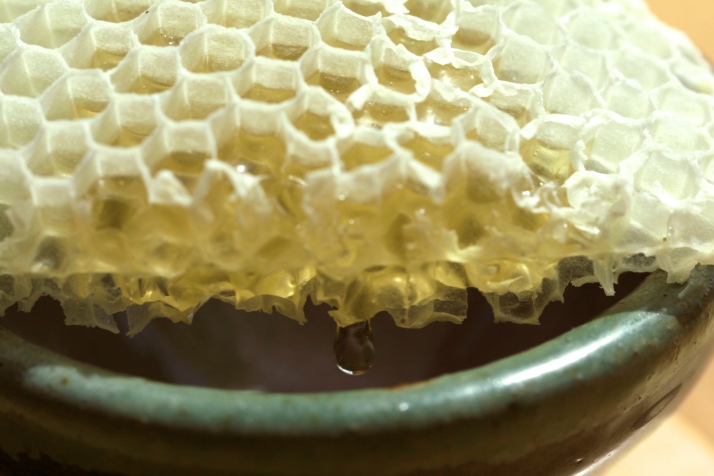 A drop of perfection.

I immediately went online to http://www.backyardhive.com to order a full suit and some fine mesh for straining. Chalk this one up to a lesson learned, and try again in a few days with proper protection. What was I thinking? At least I bought some time; I may have a week before they start to glue their comb to the back wall. 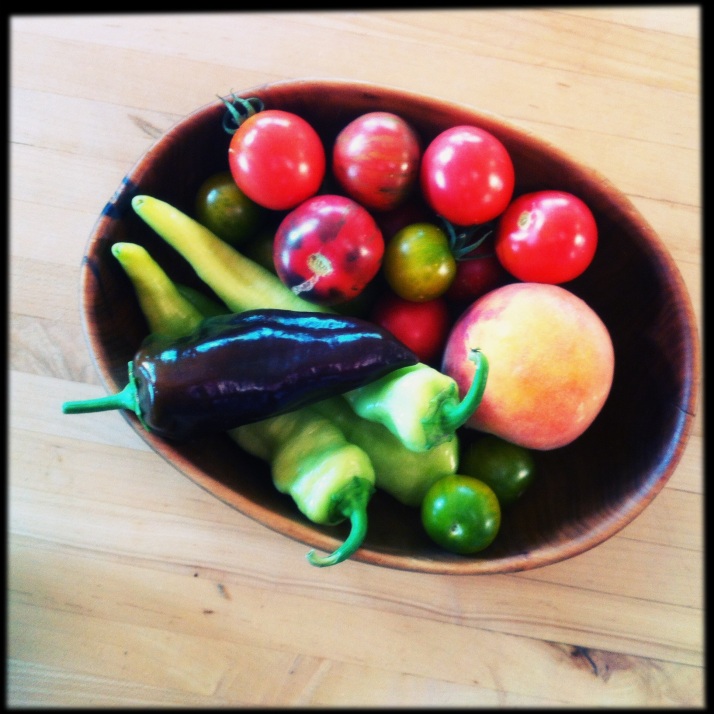 Other harvests have been more successful. Green and pink cherry tomatoes from my vines, and a chocolate pepper; yellow peppers and red cherry tomatoes from Ruth’s fabulous garden, and a Palisade peach from the market. All in the wooden bowl the Colonel carved by hand forty years ago. 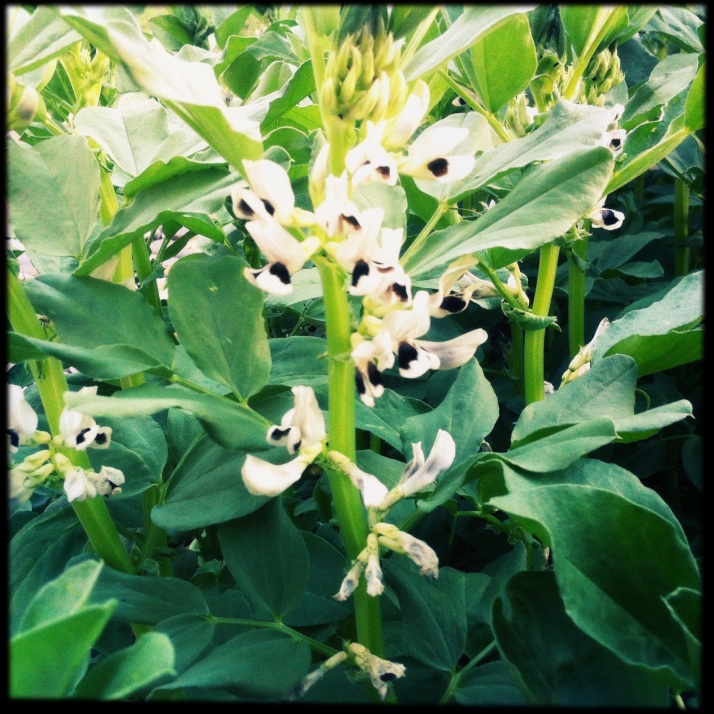 The fava beans are growing thick and tall, and full of blooms! 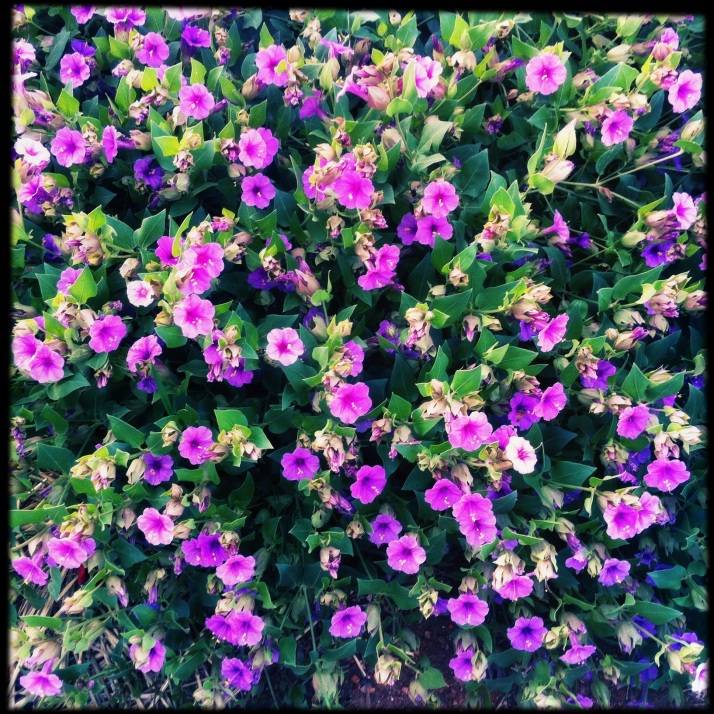 Mirabilis multiflora at the end of the turtle pen has expanded to cover the path. When they die back in autumn they form a brittle, featherweight skeleton; I’ve been scattering these skeletons around under junipers in the yard, and three or four have grown from seed under several trees.

So a few small successes to counter my humbling bee fiasco, and now for a lunch of fresh ripe tomatoes.